I can think of 2 reasons why city folks would want to go to Kuala Selangor - to taste the very reasonably priced sea food and to buy some real fresh fish. We went there for both. Well, perhaps there is a 3rd reason - the fireflies. But then, I am talking about food....


Kuala Selangor is located near the mouth of the Sungei Selangor (Selangor River). We drove to Shah Alam and there joined the Guthrie Corridor Expressway. Exiting the expressway, we turned right into Jalan Kuala Selangor. We passed Ijok. I heard there are some good eating places in Ijok, so we must make a stop there one day. 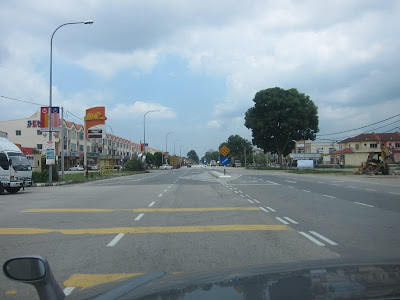 Soon we arrived into Kuala Selangor town. We drove pass it and crossed the Sungei Selangor bridge. 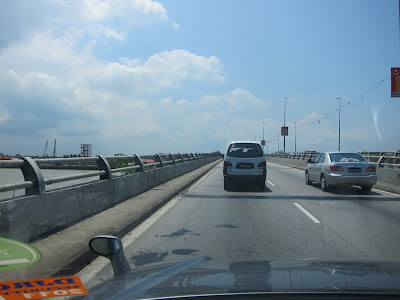 Immediately after that, we made a left turn into the fishing village of Pasir Penambang. Just after the Pasir Penambang wet market, we made another left turn into a small country path and that led us to a fishing settlement by the Selangor river that had apparently transformed itself into a makan haven - perhaps to cater for city folks like us. There are many seafood places in this settlement - all built on stilts along the river bank. They are really very pleasant and make great photography too. 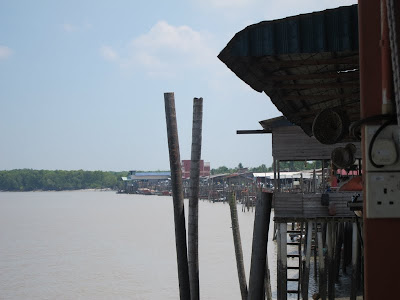 The restaurant we picked was the first in this row of eateries. The name of the place is Restaurant Kuan Hwa, along Jalan Bagan Sungai Yu, Pasir Penambang, Kuala Selangor. You may need satellite assistance to get there. The co-ordinates are N03 21.108, E101 14.956. 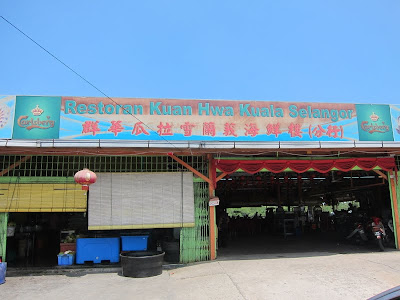 The restaurant is big, spacious and typically Chinese. It had a very relaxing and laid-back aura. 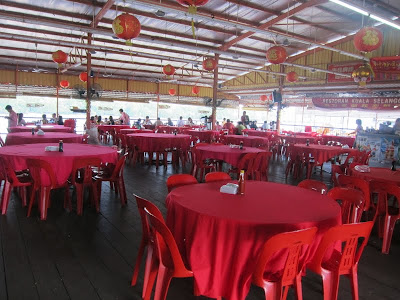 At one corner, there were tanks of live fish, shells, mantis prawns and other sea creatures that you can select for your meal. 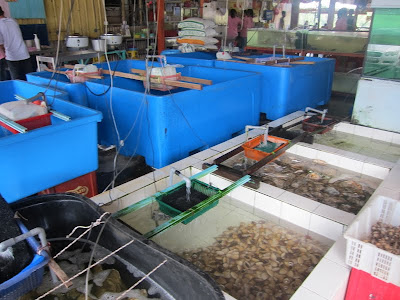 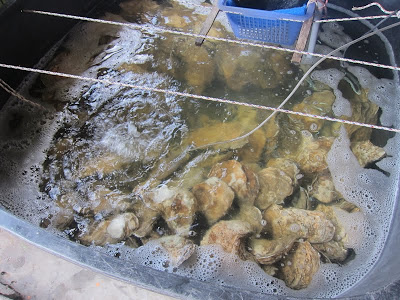 We took a table at the edge overlooking the river. It was most conducive for a Sunday afternoon lunch. The Selangor river is very clean. There was not a trace of trash in the river and its banks. Compliments to the folks in this area. It made our meal a lot more pleasant. 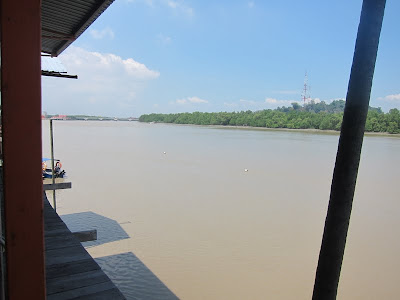 We started our meal with the deep fried sotong (squid). It was done in a batter spiced with a curry flavor. Being the first to be served, it was a hot favorite and was quickly snapped up. The sotong was very fresh. It was very well done and the rapid emptying of the plate was justice to its very good flavor. 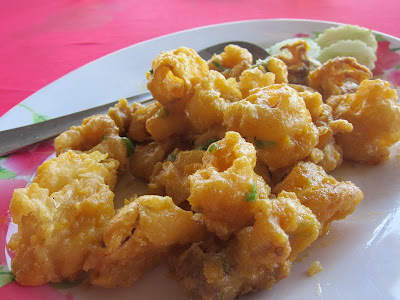 I liked the second serving very much. It was a clam soup - ala Chinese style. The clam was kind of like la la - only with a much thicker shell. The locals there call it kapar. It was cooked in a tasty soup (上汤). The soup was delicious, spiced with some chili padi and Chinese wolf berries (枸杞). The clams were, as expected, absolutely fresh - probably live from the tanks. 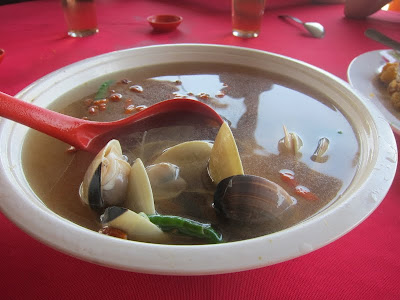 The mantis prawns were another delight. It was perfectly steamed - not at all over done - and the meat was succulently at the right texture. They were of good sizes too. They were done in a light soy sauce and some ginger strips. I remember when we were small, mantis prawns were not at all popular for apparent lack of meat. But that really is not true for when the belly shells of the mantis prawns were peeled off, thick slabs of juicy meat revealed themselves. Absolutely wonderful especially when they were so very fresh. 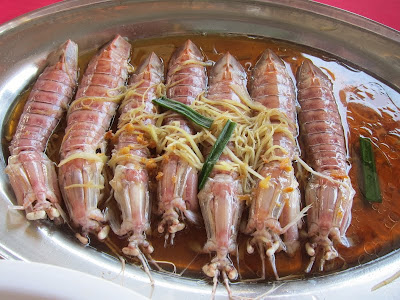 Sting ray is one of my favorite fish. But it has to be really fresh. Needless to mention, the ray we were served was exactly that. It was cooked in an assam sauce, which I did not find to be great. It was like an over spiced and over-soured tomato ketchup. But never mind the "small" hitch. The ray was great. Rarely do we find sting ray this fresh. Everything else is forgiven. 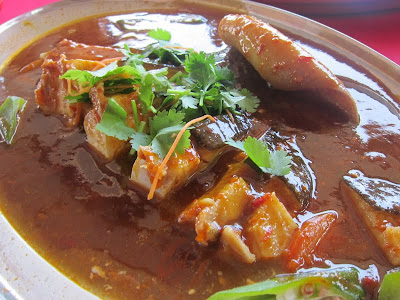 The fish we had steamed was a snapper. It was done in the same soy sauce as in the mantis prawns. Again, we enjoyed the freshness of the fish. 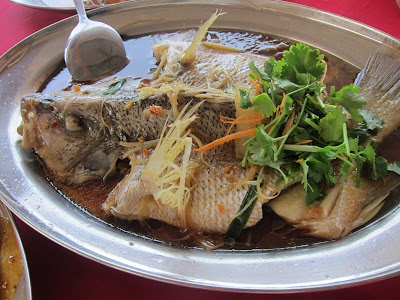 For vege, we had the sei tai theen wong (四大天王). It was a combo of 4 vegetables - okra (ladies' finger), long beans, brinjal and four-angled beans (aka wing beans) - fried in a sambal. 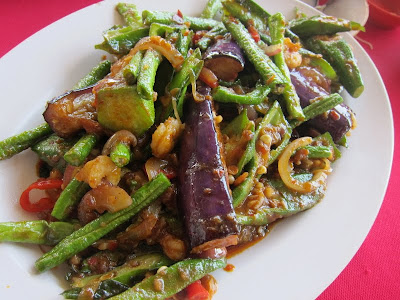 The last dish would perhaps be best taken at the start of the meal. It was a thick tofu soup (豆腐羹). But it did not arrive until we had finished our meal. Perhaps they forgot. So we had to have it as "dessert". And it turned out to be a disaster of sort. This thick soup is usually taken with some black vinegar. And so we did. The soup wasn't bad at all. It was sweet and rich and in it were generous bits of prawns and other seafood. When we were almost done, my sharp eyed nephew noticed some foreign objects in the bottle of vinegar. They were some tiny maggots that were barely visible to the naked eyes. By then it was too late for me. I had already downed my bowl of the soup with a good dose of the vinegar. We summoned the head waitress. She apologized profusely and waved the price of the soup. Fortunately nothing happened to me. I became the living proof that vinegar pickled maggots are ok for human consumption. 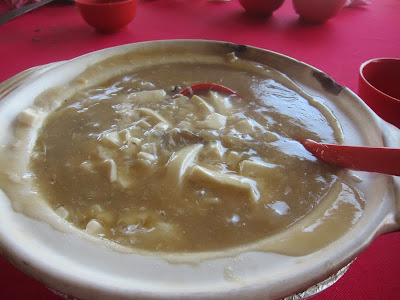 This is the cap of the vinegar bottle. If your eye sight is as good as my nephew, you can see a couple of the yucky vermin. 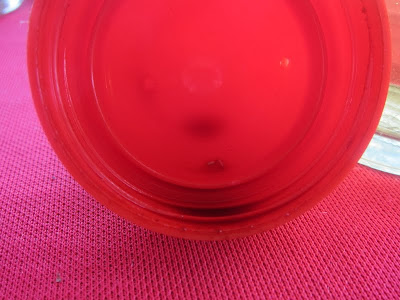 After makan, we headed off to buy some fresh fish. We came prepared with our ice boxes. Just next to the restaurant is a fish monger. 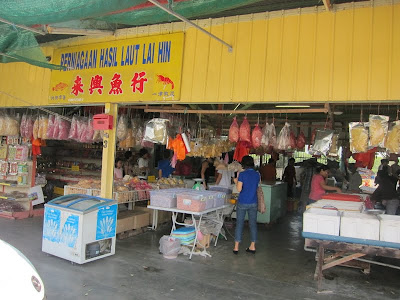 I found the place very worthwhile. The fish they vend were all fresh from the boats and they were very reasonably priced. 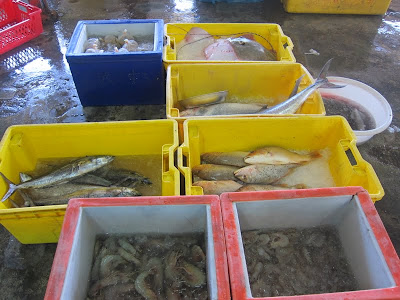 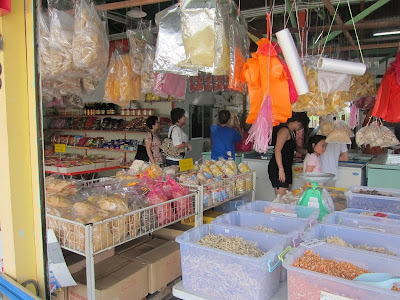 They even clean the fish for you. 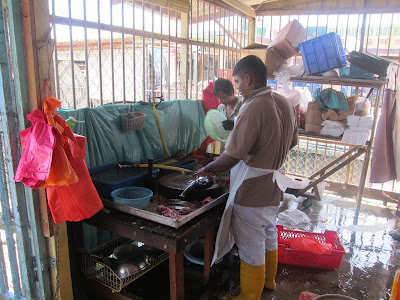 We filled our ice boxes and headed to the Pasir Penambang wet market to browse further. 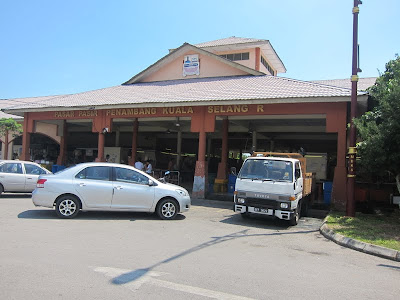 There, the choices were more. But the prices were considerably higher and I do not think the fish here were as fresh as the ones we bought earlier. Still we added into our ice boxes and headed contentedly home. 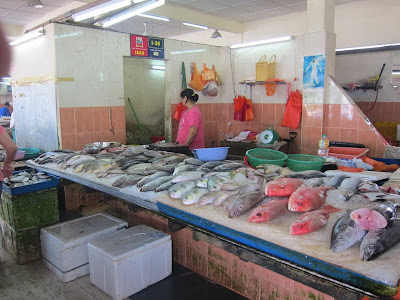 It was a fantastic Sunday outing. There was our second trip to a coastal small town for seafood makan and fresh fish. The previous was to Sekinchan. Of the two, I most definitely prefer Kuala Selangor. To start with, it is nearer. And the choice of restaurants is a lot more. I told myself I would be back. And indeed I was....
Posted by WSK at 10:29 AM

Email ThisBlogThis!Share to TwitterShare to FacebookShare to Pinterest
Labels: Seafood